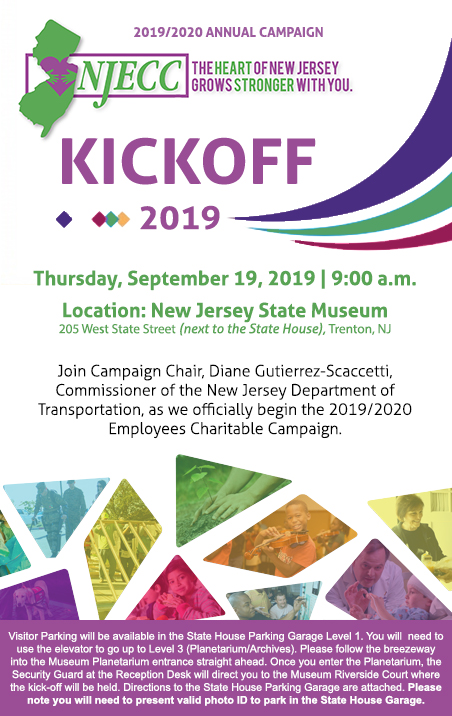 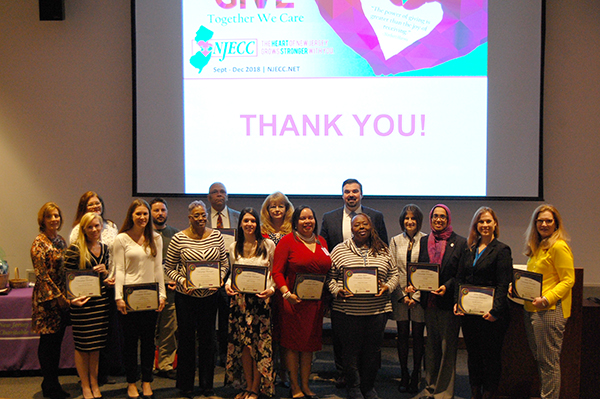 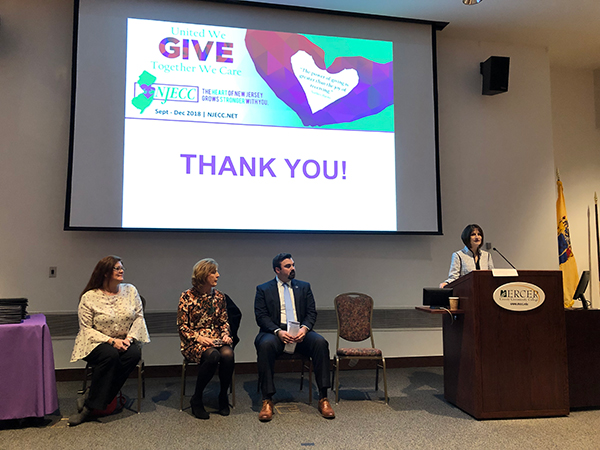 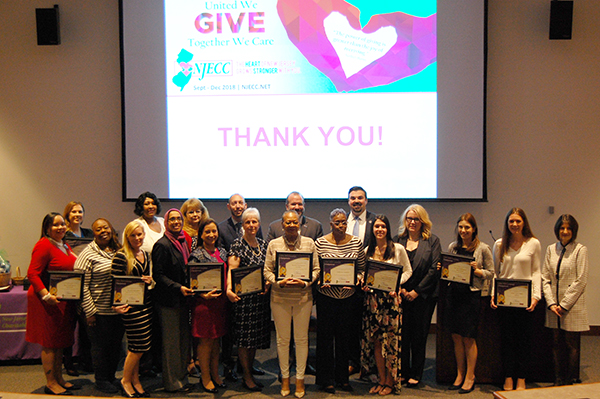 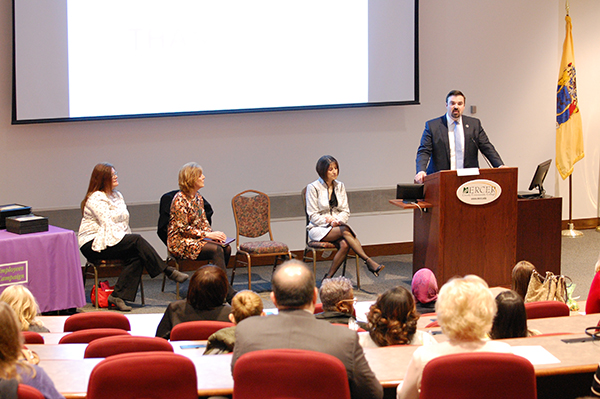 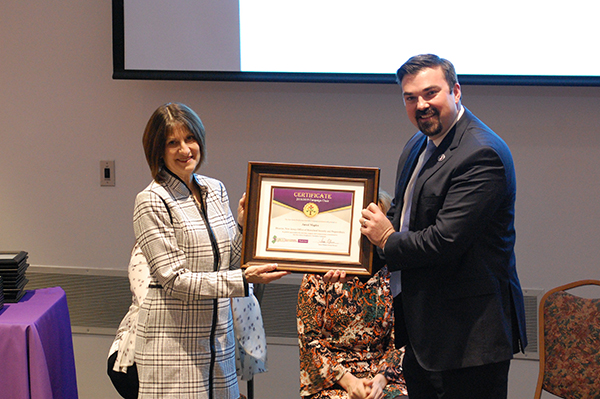 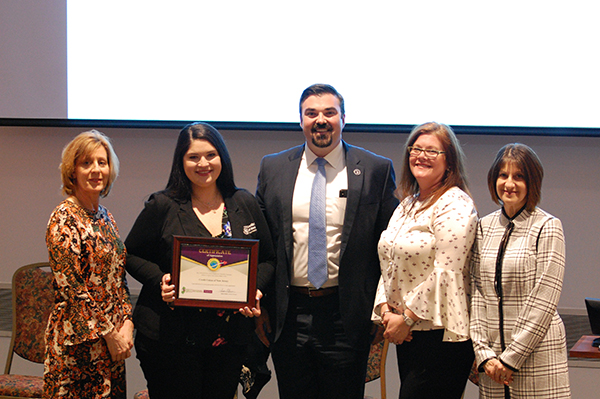 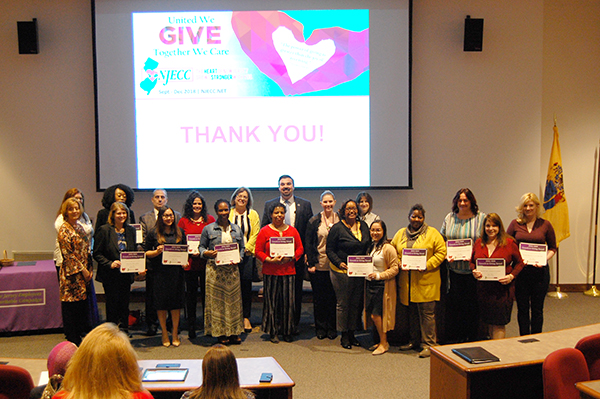 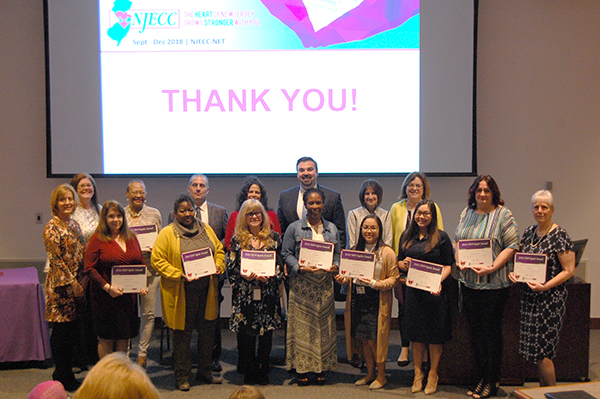 NJECC coordinators at the Labor Day Classic hosted by the NJ Department of Labor and Workforce Development September 6th. 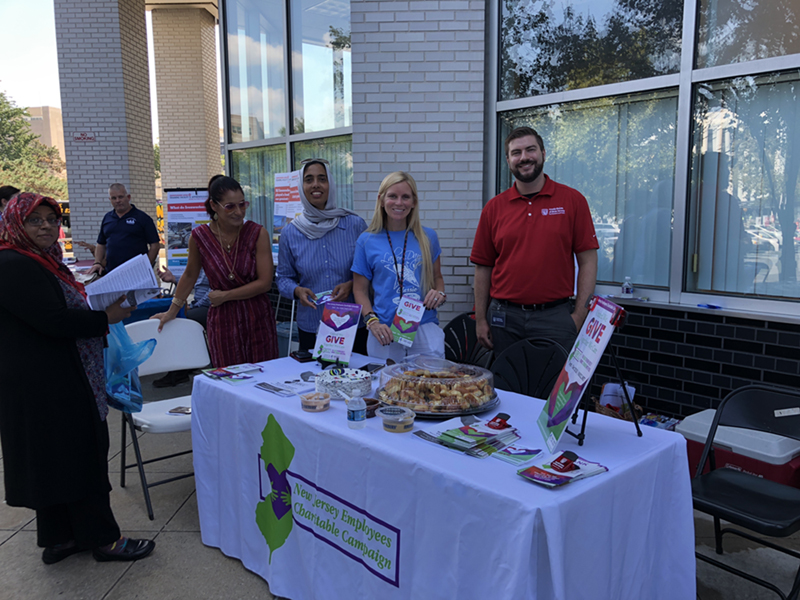 The 2018/2019 Campaign Chair, Director Jared Maples from the New Jersey Office of Homeland Security and Preparedness kicked off the 2018/2019 campaign at the New Jersey State Museum on September 13th.  The campaign will run through December.  Director Maples welcomed state and local employees and campaign coordinators.  The Director spoke about how donations raised through the campaign assist those in need and the importance of giving back.  NJECC Campaign Manager Susan O’Brien, NJECC Steering Committee Chair Sandra Toussaint from United Way of Greater Mercer County and Charity Representative Paula Aldarelli from EarthShare NJ were on hand to address the state and local employees. 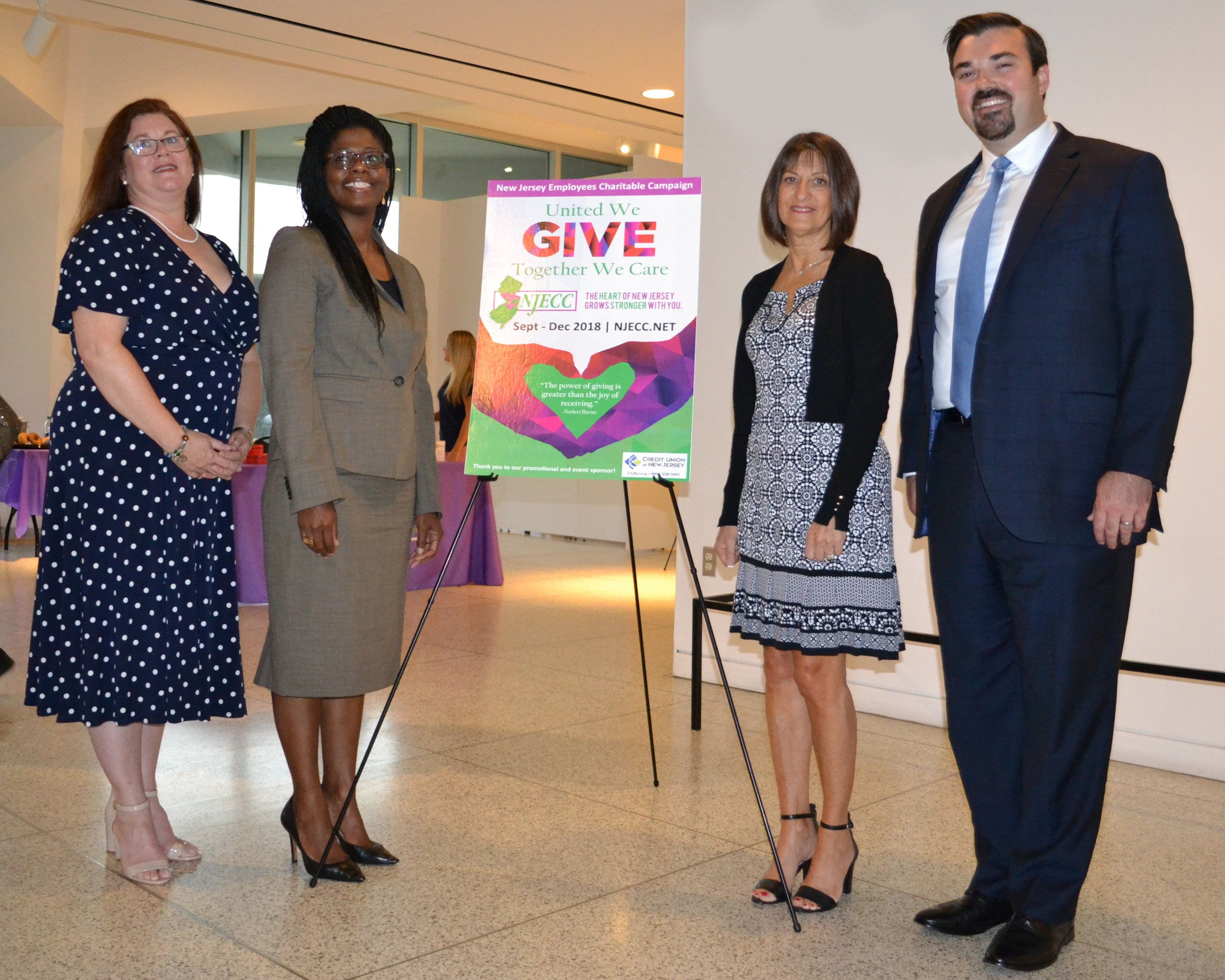 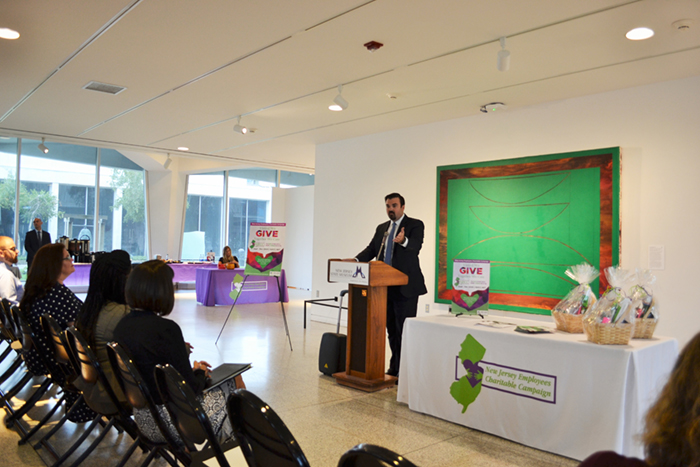 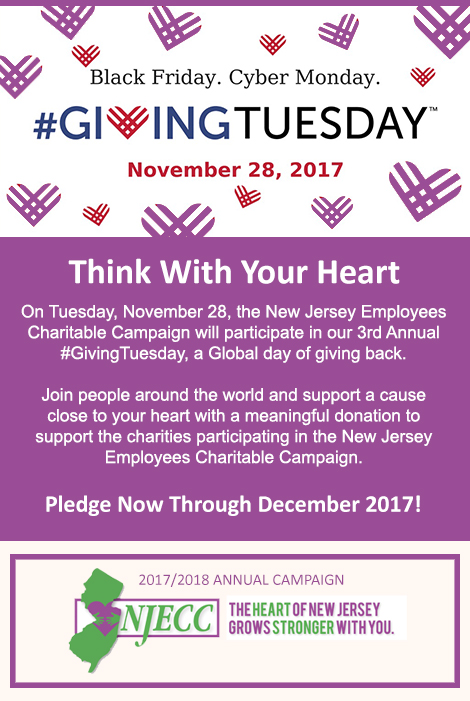 The City of Trenton held an agency fair on October 19th. 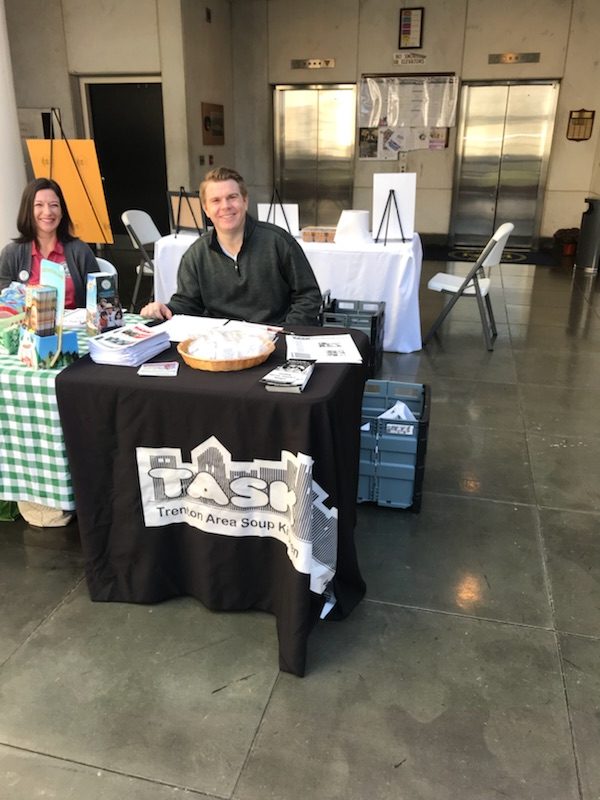 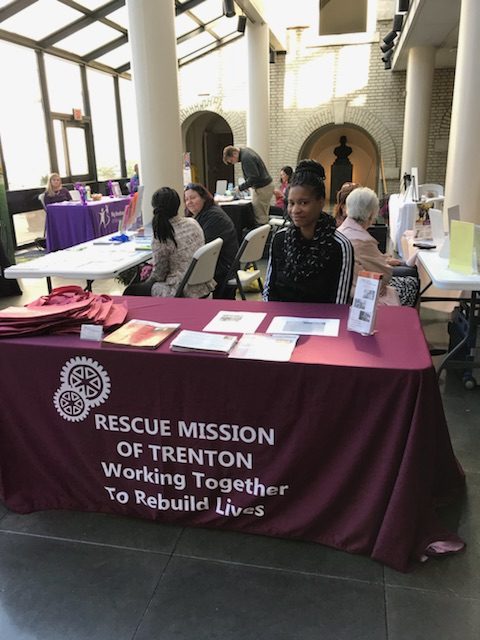 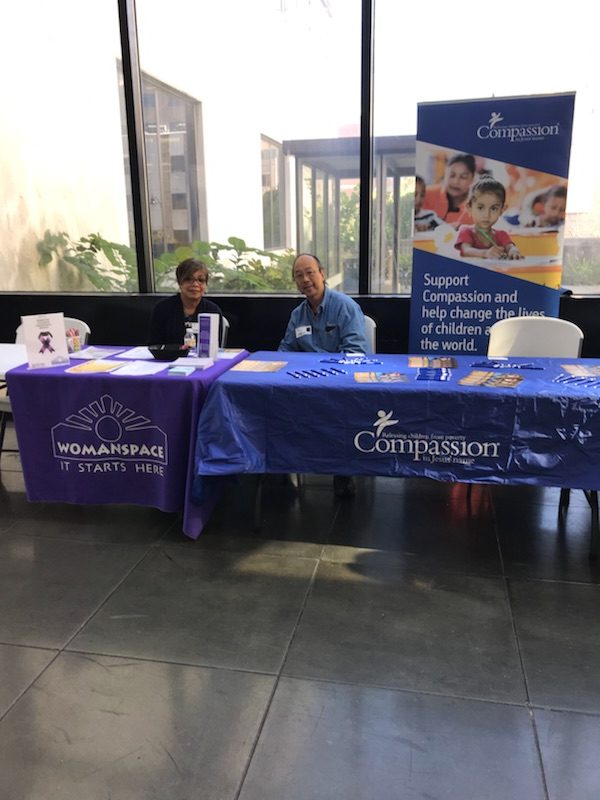 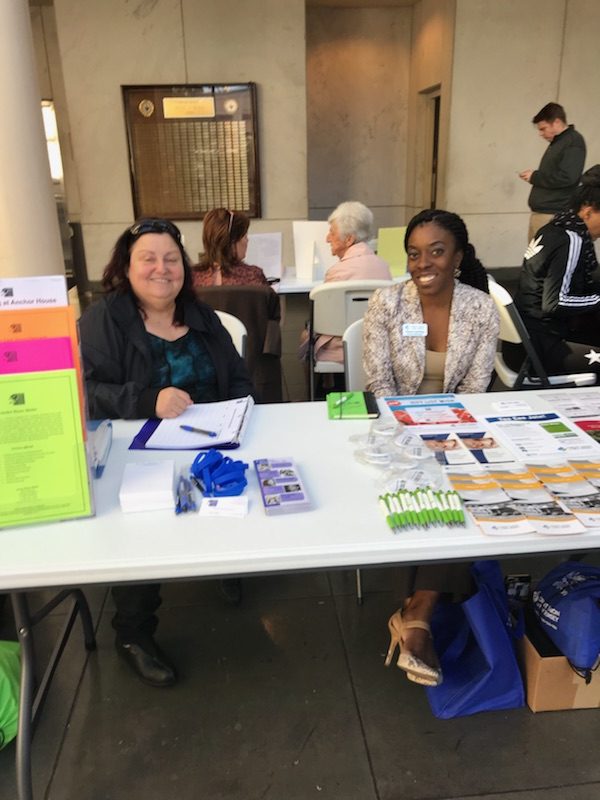 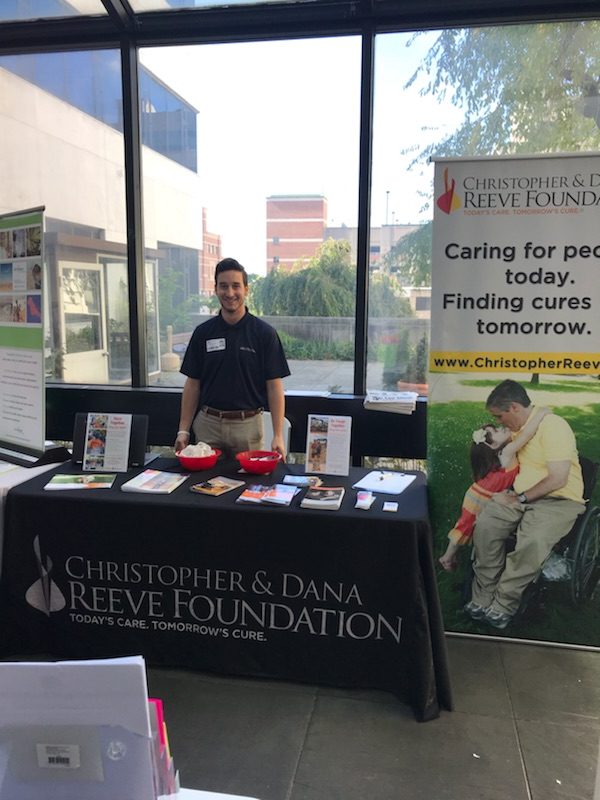 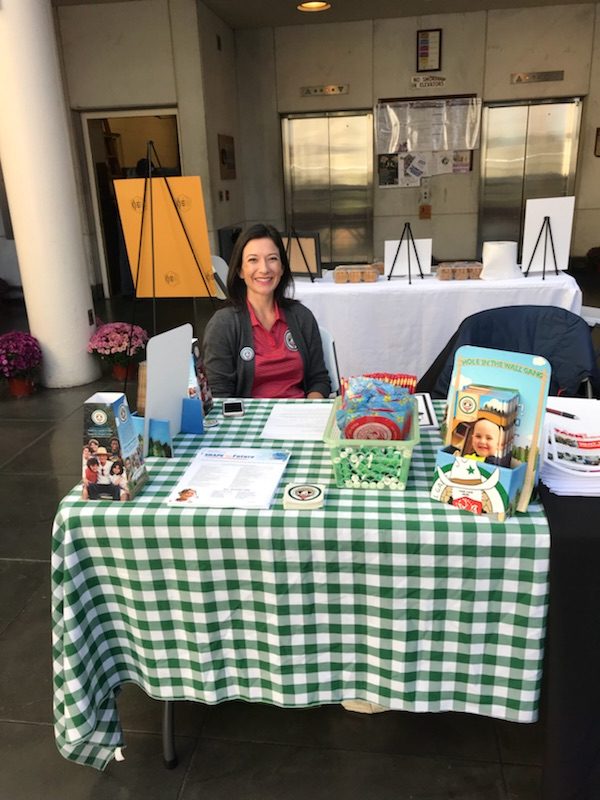 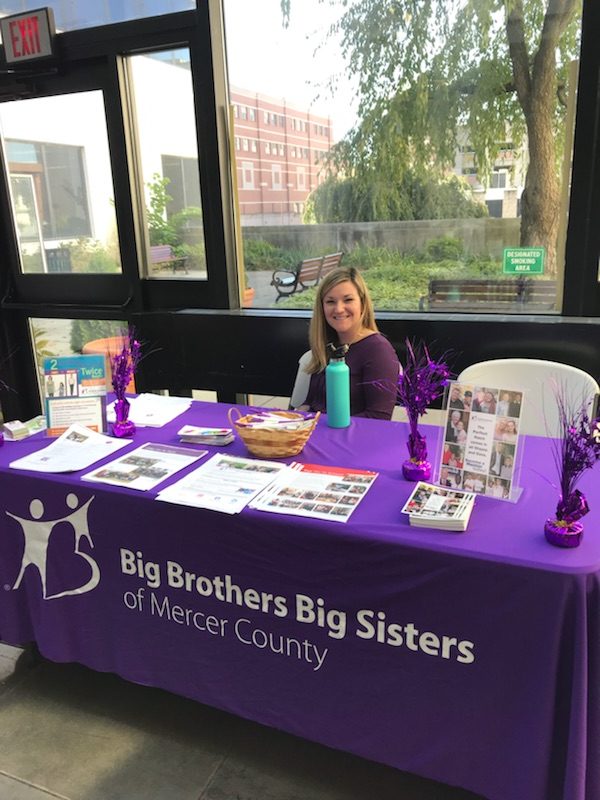 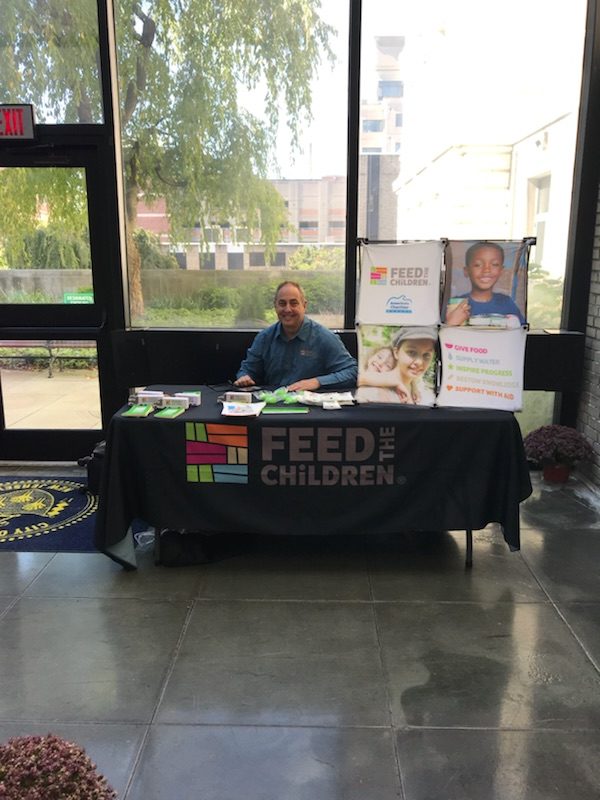 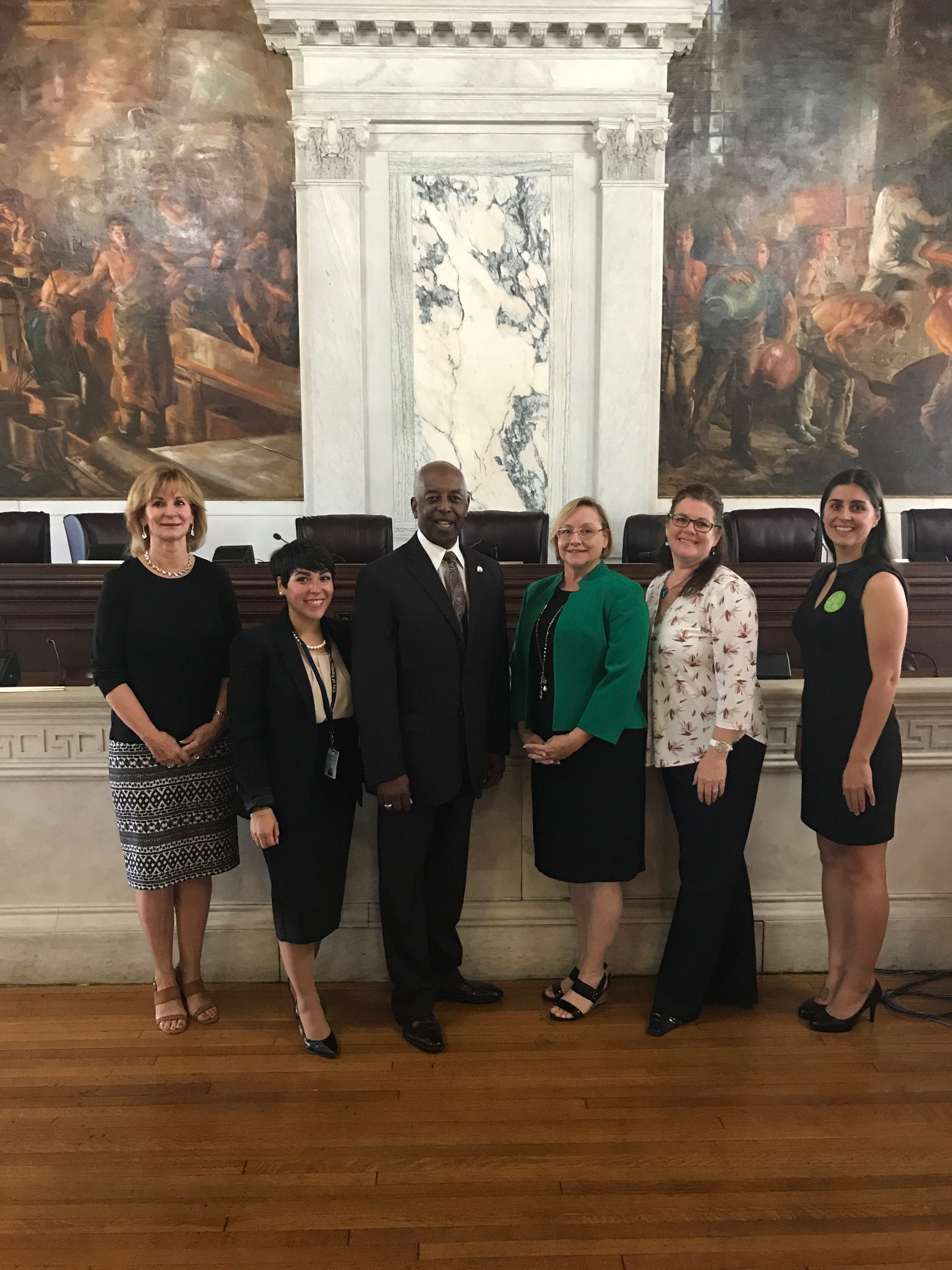 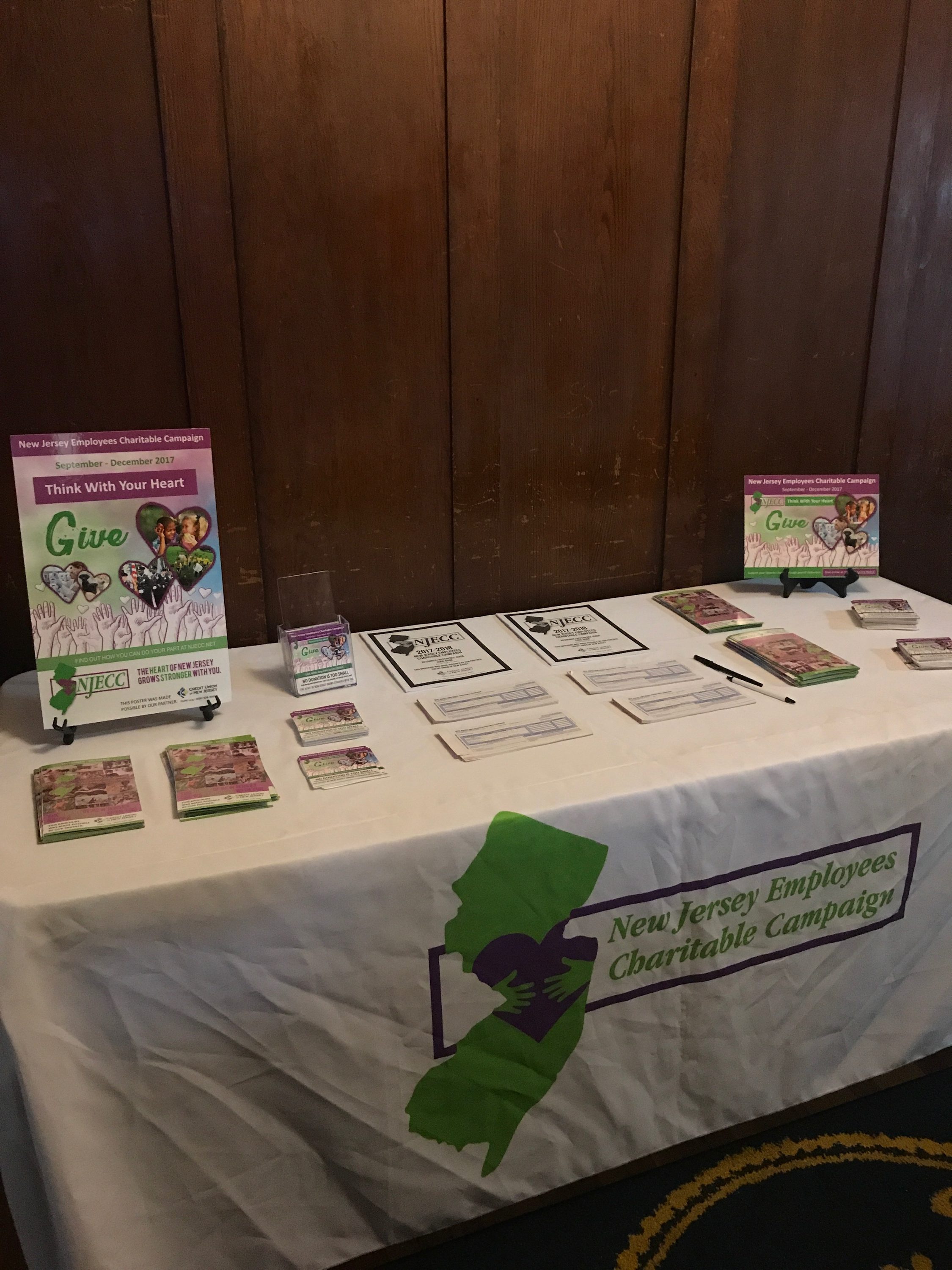 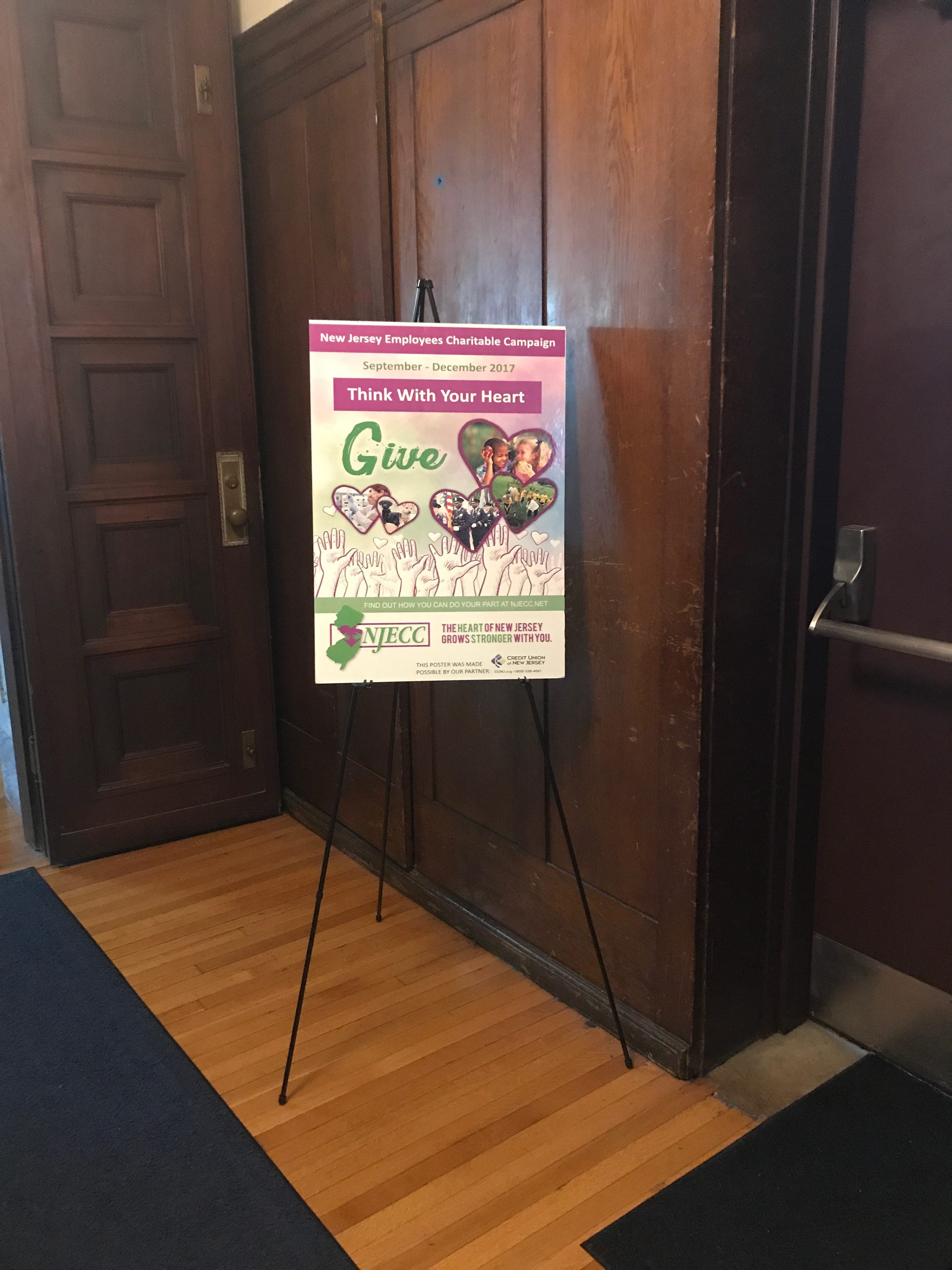 The NJECC kicked off the 2017/2018 charitable campaign on Friday, September 8the at the New Jersey State Museum. The campaign will run through December. Co-Chair Dr. Harvey Kesselman, President of Stockton University welcomed state and local campaign coordinators and spoke about the importance of giving back and how beneficial the program can be for charities participating in the campaign.

The NJECC is a direct way to help those in need sustain local, national, and international health, educational, environmental and social service organizations, and make a meaningful contribution to your community.

The campaign which runs from September through December each year, provides state and local municipal employees with the opportunity to contribute to more than 1,100 charities through payroll deduction.

Commissioner Hammer and President Kesselman were honored for their commitment to the 2016 campaign. Their energy, dedication, and support helped increase the credibility and visibility of the campaign.

The Commissioner and President gave out the Chairperson’s award to departments that demonstrated outstanding dedication, exemplary participation, and for exceeding the previous year’s fundraising goal. The awards went to the Office of Information Technology, NJ State Commission of Investigation, the City of Trenton, The College of NJ, Stockton University, and NJ Institute of Technology.

Susan O’Brien presented the Campaign Manager Award to the following coordinators for team leadership, dedication and going above and beyond to promote the ECC. The awards went to Peter Baratta/Stockton University, Sharon Simmons/Department of Transportation, Daryl Jones and Chris Papp/Department of Education, David Zappariello and Sue Lubrano/South Jersey Transportation, John Cipriano and Gerri Greco/Office of Information Technology and Yetta Somers/Board of Public Utilities.

The Campaign also acknowledged and thanked The Credit Union of New Jersey for partnering with the NJECC. The ability to provide campaign materials for the coordinators would not be possible without the generous support from the credit union.

Thank you for your donations and support!